The 8th annual Mevea Seminar was streamed live on October 27, following from last year’s pioneering virtual seminar. Our objective for 2021 was to further segment the seminar, focusing on OEM’s and how Digital Twins are currently being used in control system software testing and development.

This year, our audience represented six out of the seven continents (the only continent missing is Antarctica). Together with our speakers and seminar partners, we brought together over 250+ people from 30 countries, representing over 100 organisations. 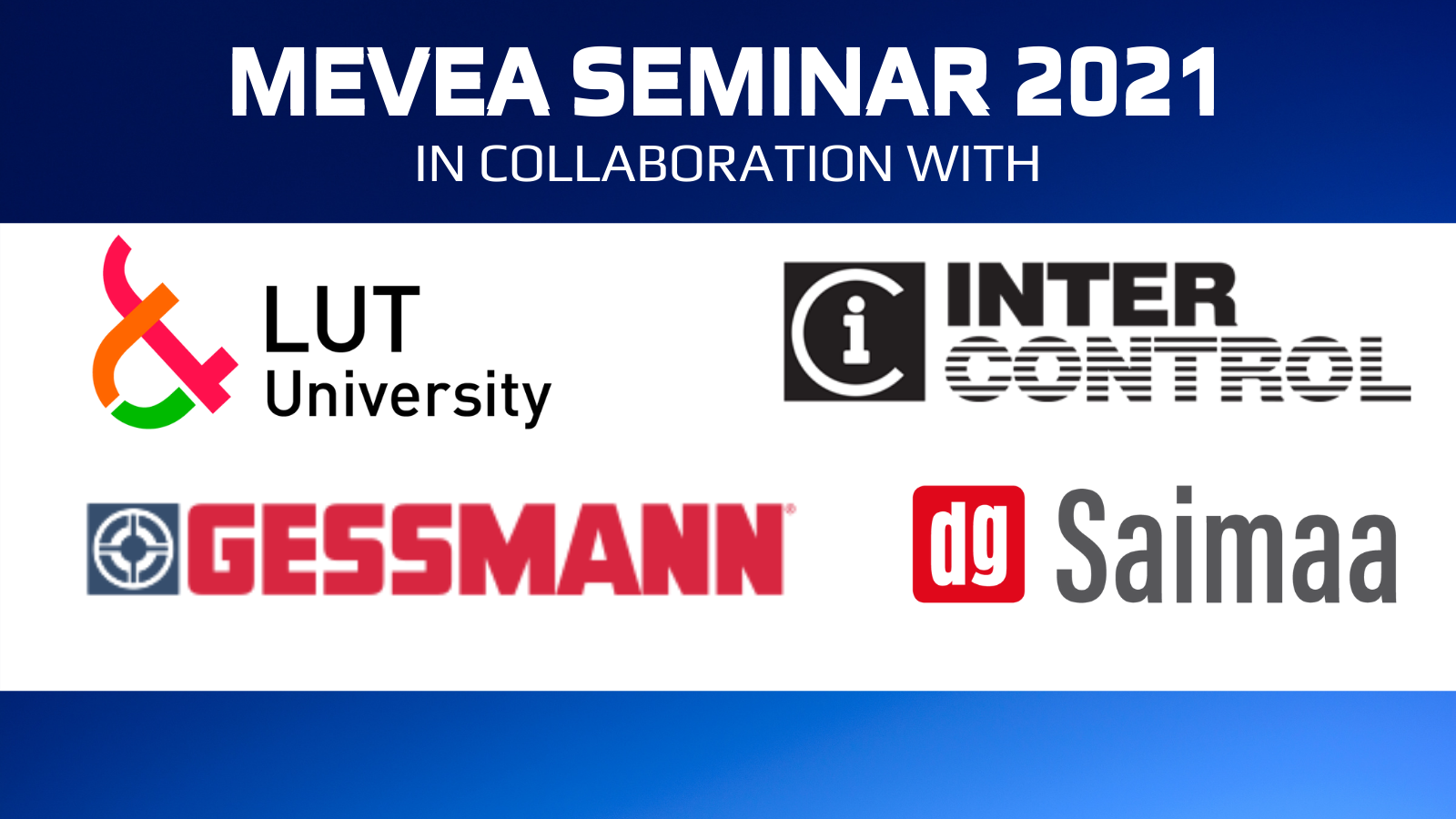 Watch the seminar recording by registering below!

This year, Mevea Seminar focused on Digital Twin in Control System Software Testing and Development. To provide a versatile overview of the current situation in both industry and academia, we were joined by five organisations experienced in the use of Digital Twins, including Junttan, Mitsubishi Logisnext, Rottne, SICK, as well as Oulu University of Applied Sciences.

The event started with an executive greeting and opening presentation by Mevea’s Director of Sales, Marketing, and Business Development, Raimo Nikkilä. His presentation provided a thorough overview of the key benefits and definitions for Mevea’s Digital Twins, setting the stage for the seminar speakers of 2021.

Nikkilä explained that there are various ways to implement Mevea’s Digital Twins, namely as a stand-alone, a virtual sensor, or in the future, as an onboard/online Digital Twins.

Stand-alone Digital Twins can be used when access to a physical product is not possible, or when its use is not practical, such as in experiential sales and marketing. Virtual sensor Digital Twins serve, inter alia, in maintenance, as sensor data can be collected from physical assets and fed to the Twin, providing an in-depth understanding of the physical asset’s condition. Finally, the continuously connected solution, the onboard/online Digital Twin is capable of synchronising itself with any connected individual physical asset. Mevea currently focuses on research and development in this key area, as no other market player can do the same.

He concluded his presentation by explaining the business benefits obtainable through the adoption of a Digital Twin, namely early product understanding that enables cost-effective modifications early on in the design phases, reducing overall PLC costs.

Harjunheimo’s presentation included an explanation of how Junttan conducts tests and how they benefit from Mevea’s Digital Twin in their processes. He also provided an example case of how Junttan makes use of Mevea’s simulation technology, what they have learned, and finally made the following conclusion:

Udd’s presentation delved into the development of software for AGV and AGV simulation, which was followed by a testing load handling case with a simulator. He provided an in-depth explanation of the build-automation with manual testing and proceeded to underline how SICK was able to replace everything on its CAN-bus, including the drive -, steer-, pump-, and safety controller, as well as the I/O module and steer encoder with Mevea solution, given its ability to mimic each element. To follow up on the manual testing process, Udd also explained how SICK’s testing process is extended with automated testing.

Udd concluded his presentation by pointing out that although SICK’s journey with Mevea-enabled automated testing is still in its early stages, it has already helped conduct more automated testing than ever before. While SICK still opts to use prototypes in more complex testing cases, Mevea’s solution has provided SICK with many new avenues and options in software development.

The third speaker, Mr. Mathias Paulsson, System Engineer at Rottne, gave a presentation focusing on how Digital Twins can be used to save trees.

In his presentation, Paulsson explained the use of Digital Twins in operator training, referencing Russby’s forestry school that currently uses four simulators to train new operators. Furthermore, he highlighted some of the major business benefits obtainable from the implementation of Digital Twins, namely cost reductions. The benefit, especially in operator training, would come from significantly reduced fuel costs, reduced number of felled trees, and their lost market value, as well as the eliminated risk of breaking real machines during training.

Paulsson concluded his presentation with some pointers to those considering the implementation of Digital Twins on how to approach the process and what sort of people should be assigned to ensure the technology is used to its fullest potential.

The fourth speaker, Dr. Jan Jarvis, Head of Virtualisation at SICK, discussed the impact of application modelling and virtual sensors on solution development and testing.

Finally, he provided the following conclusions of the presentation:

The fifth speaker, Mr. Petri Junttila, Project Manager of NUVE Project and a Senior Lecturer at Oulu University of Applied Sciences, provided the seminar audience with an overview of the NUVE Project and its core, the NUVE-LAB, an independent research environment for developing new energy-efficient and environmentally sustainable autonomous utility vehicles.

Junttila’s presentation provided the audience with a glimpse of NUVE-LAB’s heart – a 1,8MW (approx. 2400 horsepower) active dynamometer with four electric motors with the capability of producing 25,000 N⋅m. According to Junttila, NUVE-LAB can take in vehicles weighing up to 65 tons, reaching up to 12 metres.

Junttila explained that test vehicles are connected to the active dynamometre through their drivetrains. The machine control system and AI are connected to NUVE Project’s virtual system, allowing the vehicle to make perceptions of its surroundings in the virtual environment. Data generated in the virtual world by virtual sensors is transferred to the real machine’s control system, enabling the machine to make its work cycles in the virtual world. Through the connection to the active dynamometre, all loads experienced by the virtual machine in its virtual environment are transferred to the real vehicle. Junttila pointed out that the project has benefited immensely from Mevea’s real-time capable physics modelling as well as its existing solutions for the type of environment developed in the NUVE Project.

The presentation included two test cases, conducted in collaboration with the Project’s partners. The first test case was conducted fully virtually in May 2021 and focused on mobility in a virtual model of the Narvik Harbour and the analysis of the vehicle data’s accuracy. The second test, to be held in June 2022, will be a real-world test run, and in tandem with NUVE-LAB, provide a more thorough view of the Project’s capabilities.

Watch the seminar recording by registering below